the world premiere “Chapter 3: The Brutal Journey of the Heart” by the Israeli choreographer Sharon Eyal, who is taking part in the Ruhrtriennale for the first time with her company L-E-V, is the highlight of the last week of the festival. From Thursday, 26 September 2019, the third part of her trilogy about love will be performed four times in Bochum’s Jahrhunderthalle. As in the first two parts “OCD Love” and “Love Chapter 2”, Sharon Eyal is again cooperating with the music producer Gai Behar and the drummer and DJ Ori Lichtik, who have recorded live techno beats to create a soundtrack for the choreographer’s expressive body images. The dancers’ costumes were designed by Maria Grazia Chiuri of Christian Dior Couture. The mutual work continues a cooperation that started in 2018 with the choreography of a Dior fashion show by Sharon Eyal.

Artistic Director Stefanie Carp about this year’s festival: “At Ruhrtriennale 2019 we’ve seen remarkable creations with a strong artistic energy, which dealt with our present and produced vivid and controversial discussions.”

Alongside Christoph Marthaler’s “Nach den letzten Tagen. Ein Spätabend”, the highly acclaimed productions of the Ruhrtriennale 2019 include “All the good” by the Needcompany and Kornél Mundruczó’s production “Evolution” from György Ligeti’s “Requiem”.

Shortly before the end of this year’s festival the estimated box office capacity lies at about 80 % with 27.000 issued tickets. In addition, there have been around 34.000 visitors to the freely accessible formats such as “Third Space” at the Jahrhunderthalle Bochum and the installations “Mixing Plant” by Tony Cokes (Mischanlage Zollverein, Essen), “Bergama Stereo” by Cevdet Erek (Turbinenhalle, Bochum) and Barbara Ehnes’ “Αλληλεγγύη– Archive of Messages. Words in Motion” (Third Space, city centre Bochum), which are open until 29 September. The most visited performances were “Nach den letzten Tagen. Ein Spätabend”, “Evolution”, “Everything that Happend and Would Happen” and “Dido and Aeneas, Remembered”. Altogether more than 60.000 people visited the Ruhrtriennale 2019.

Dr. Vera Battis-Reese, Managing Director of the Kultur Ruhr GmbH: “In the last few weeks we have experienced a wealth of impressive productions, which are only possible at the Ruhrtriennale and make the festival something unique.”

Until the end of the festival, alongside Sharon Eyal’s premiere of “Chapter 3: The Brutal Journey of the Heart” (from 26.9.), it will also be possible to see “Steamboat Switzerland” (25.9.), the last concert in the series “MaschinenHausMusik” and “(…..) – Ein Stück dem es scheißegal ist, dass sein Titel vage ist” (27./28.9.) by the award-winning director Jetse Batelaan, in the Maschinenhaus Essen. In the installation “Bergama Stereo”, the trio “contagious” (27.9.) and Berlin’s DJs İpek İpekçioğlu and Mieko Suzuki (27.9.) will be performing in the Turbinenhalle. The artist Cevdet Erek himself decides the musical programme with his trio at the “Bergama Stereo Finissage + Davul Step 2” (29.9.). The programme in the “Third Space” ends with the discursive events “Semiotics of Food” with Sebastian Schellhaas (25.9.) and Bojana Kunst (26.9.) and the final party “Nuit Sauvage” (28.9.) with Die Freedes and N Bisschen Strange. On 25/27/28 September, interviews on the topic of solidarity for the installation “Αλληλεγγύη – Archive of Messages. Words in Motion” can be held one last time with the artist Barbara Ehnes (Registration under ruhr3.com/ehnes). On Saturday, 28 September, the Ruhrtriennale is also taking part with an artistic contribution by Barbara Ehnes and workshops of the Junge Triennale in the Westendfest, which is taking place at Bochum’s Springerplatz from 2.00 to 6.00 p.m.

Next Ruhrtriennale will be in August and September 2020. The programme is to be published next spring. 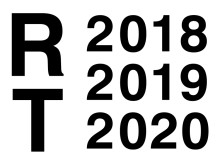 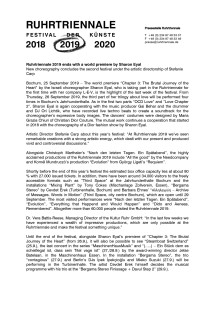